In the recently released update 3.2.1 we added support for showing the typical speed graph corresponding to a typical stroke’s boat acceleration to Analytics.

In this post, I want to show you 3 common mistakes that rowers make with their rowing technique and how they show up in boat acceleration, which measures the effective total boat force.

The graphs show boat acceleration at the bottom (solid lines) and boat speed at the top (dashed lines). The addition of boat speed allows a coach to easier see how boat acceleration relates to the actual boat speed. All data that I’m showing here is taken from real measurements and is representative for common mistakes that I have seen rowers make from my own coaching experience as well as from working with athletes and coaches from elite to masters levels.

If we look at the speed graphs, it should be clear that a higher average speed for the stroke (= faster to the finish line) can be deduced by looking at the area between the two graphs. For example in the graph below, the purple speed graph consistently exceeds the blue graph. As a consequence, average boat speed for the purple stroke is higher. 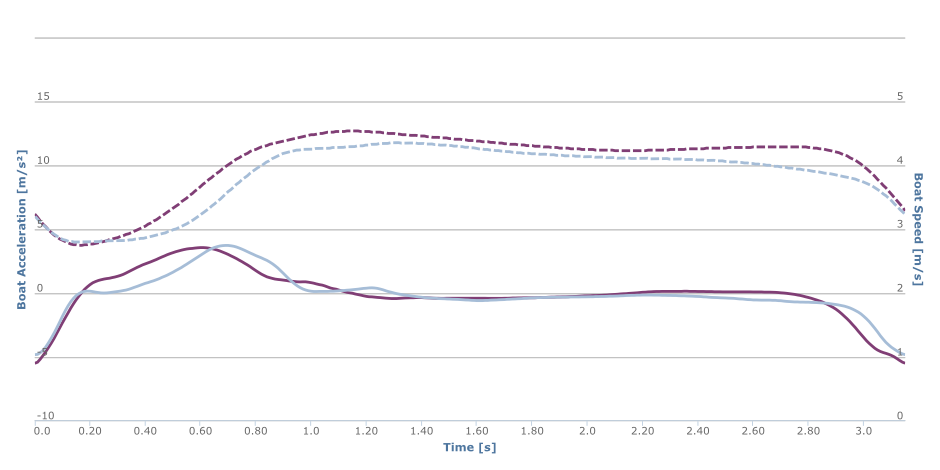 A late force application in the drive results in a lower average boat speed.

In this example, we can see that both athletes achieve a similar peak acceleration of the boat, but the drive of the purple stroke is much more “front loaded” than the drive of the blue stroke. As a consequence, the purple stroke gains more boat speed earlier and can hold on to this speed difference for the remainder of the stroke, which results in a higher average boat speed.

To improve this, athletes should try to focus on an early force application and a good coordination of the legs, trunk and arms and immediately begin the drive. Especially in crew boats, some athletes may have a tendency to “wait” at the catch. This is mostly an issue of not consequently pushing the legs or a too early rising of the upper body hindering an effective force production on the pin. Think about it this way, the upper body needs to transfer the force from the legs via the arms and to the oar handles. The strength of the upper body  can thus limit the force at the pin that the legs can effectively generate. Trying not to raise the upper body while driving the blade through with the legs helps keeping the body more rigid and producing more force with the legs.

Standing on the Stretcher

In the same example, we can see another mistake. Looking at the recovery starting at about 2.2s, we can see that the blue stroke’s boat speed steadily falls of. The source for this problem is that the crew is “pushing” on the stretcher, which makes the boat go slower because the force on the stretcher is directed towards the stern. It acts against the direction of travel of the boat.

Standing on the stretcher results in a premature loss of boat speed at the catch.

The purple stroke maintains boat speed for longer, but necessarily has a harder but shorter push on the stretcher. One of our stroke metrics to keep an eye on for this is catch duration, which measures the length of this “pushing on the stretcher” by looking at the duration of the phase with negative boat acceleration.

Where does this early push on the stretcher come from? Coordination on the slide is very important. If we carefully look at 1.2s in the graph, we can see that the blue stroke shows a short boat acceleration here. This is an indicator that the crew pulls on the stretcher to accelerate the sliding seat. A higher speed on the sliding seat means more impulse (the product of a moving object’s speed and its mass) needs to be exchanged with the boat at the catch. For some athletes this is difficult and leads to an earlier push on the stretcher.

Athletes should try to maintain a constant pull on the stretcher for as far into the catch as possible, as this will reduce unnecessary variations in boat velocity and thus increase fluid drag efficiency. Improving the coordination for a quick extension of the legs helps achieving a quick catch. Drop-jumps are a useful exercise for this. Blade-work however is equally important, which brings us to the next common problem.

It is no coincidence that the third mistake we’re looking at happens at the catch as well. The preparation of the catch and executing the catch cleanly may well be the most important aspect of rowing technique. 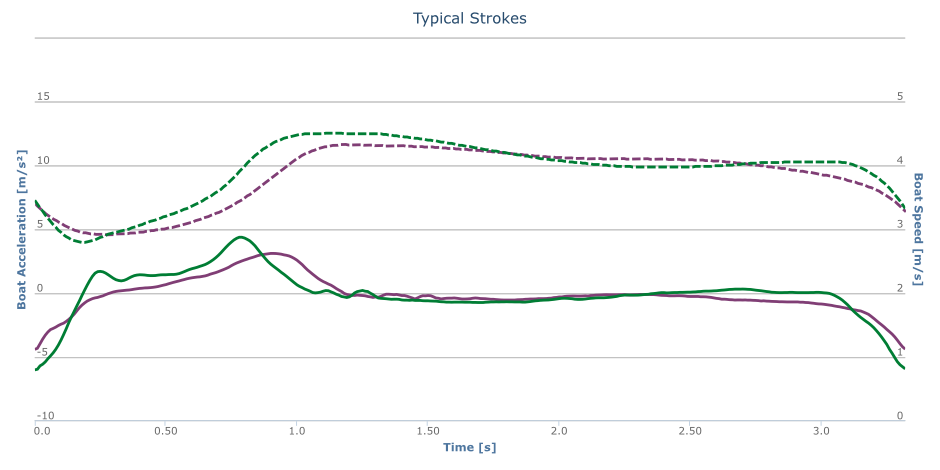 A slow rise of boat acceleration at the catch sets up for a weak drive.

The source for this mistake is usually a “washing in” of the blade. When  the blade has not fully entered the water, it cannot generate a positive force on the pin that would propel the boat. It is usually followed by a weak drive. Looking at the speed graph in this scenario however, we can see one interesting aspect though. For a short period at the catch, boat speed is higher for the purple graph. This is a consequence of the catch being “lighter” and because I have manually aligned the speed graphs at the catch so that it is easier to visualize the difference between the speed graphs. 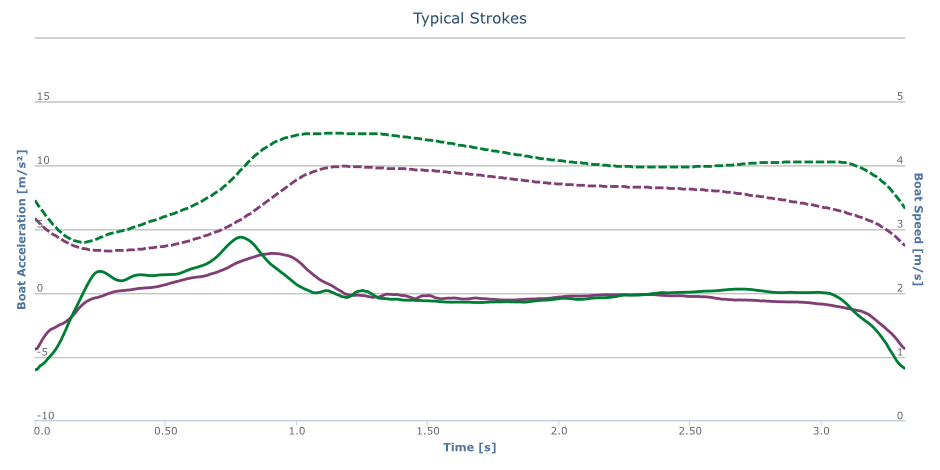 As a consequence, we need to take the measurement conditions into account when comparing the absolute difference between speed graphs. Did you measure rowing up or down the stream? Was there any wind? These two influences directly impact the measured speed, but do not (stream, when it is constant) or only marginally (wind) affect boat acceleration.

There’s one other thing that we should look into when comparing boat speed and that is the variance in boat speed and how it affects the work required to overcome drag. Mechanic work in rowing is a difficult concept, and even more so when we separate it from the physiological load on an athlete which may or may not produce mechanic work… But that’s a topic for another article.

If you have any question about your speed and acceleration graphs, please post them in the comments and I’ll be happy to offer you my view on them.

Want to record and improve your own rowing stroke? Get our App and Try Rowing in Motion.