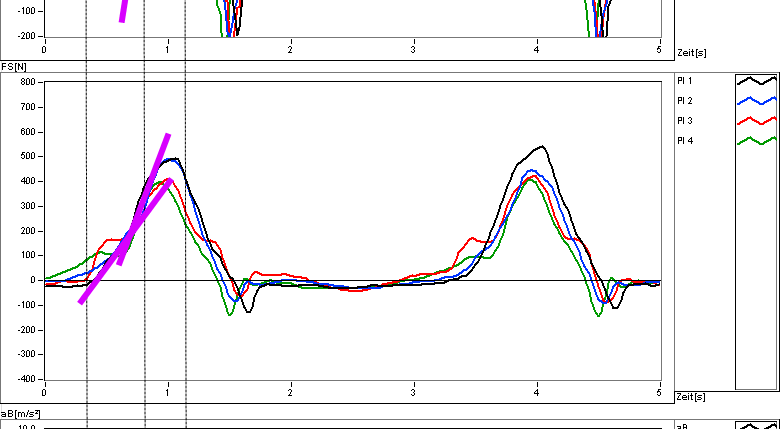 In this post I want to take a look at the relation between “force curves” and boat acceleration. I will also touch on the topic of the mystical drive hump and demonstrate where it comes from.

To begin with, let us freshen up on some basic relations between forces, acceleration and speed.

These relations are covered by the first and second Newton’s laws of motions and summed up in the equation F=m*a.

Forces and velocity are both vector quantities, which mean they have magnitude and direction. The force that determines the change in velocity is called the net force,  and is the result of adding all the individual force vectors that act on the object.

Visualized, this means that the net force vector is the vector that we get by chaining all individual force vectors (e.g. A, B) and drawing a vector from start to finish (A+B).

When we want to determine how a rowing  boat is moved forward, we need to look at the forces that are applied to the boat. In a simplified model, there are three principal forces acting on the rowing boat: gate force and stretcher force and drag force.

Main forces on a rowing boat, source V. Kleshnev: Boat acceleration, temporal structure of the stroke cycle, and effectiveness in rowing, Proceedings of the Institution of Mechanical Engineers 2010

For the question of boat speed, we can disregard forces that do not directly on the boat such as the handle force or blade force.

Gate force is directed in the direction of travel, while stretcher and drag force work against it. Within reasonably limits, we can accept drag force as a given function of boat speed (drag is proportional to the cube of speed) and outside conditions (wind).

Because stretcher force works against gate force, we do always need to keep in mind how these two forces interact to create the net boat force which determines acceleration and thus boat speed. It is very important to not loose track of this big picture” when focusing on optimizing e.g. peak force. Worst case, a crew trying to exert a higher gate force while simultaneously increasing stretcher force will only have a higher cardiovascular load, for no gain in boat speed.

So now that we know that it is important to focus on improving the net boat force to achieve a higher boat speed, the next question is how do we measure this? If you could follow me until this point, I hope the answer is obvious. Since boat acceleration is directly proportional to the net boar force, it is the perfect proxy for somehow measuring or calculating the net boat force. 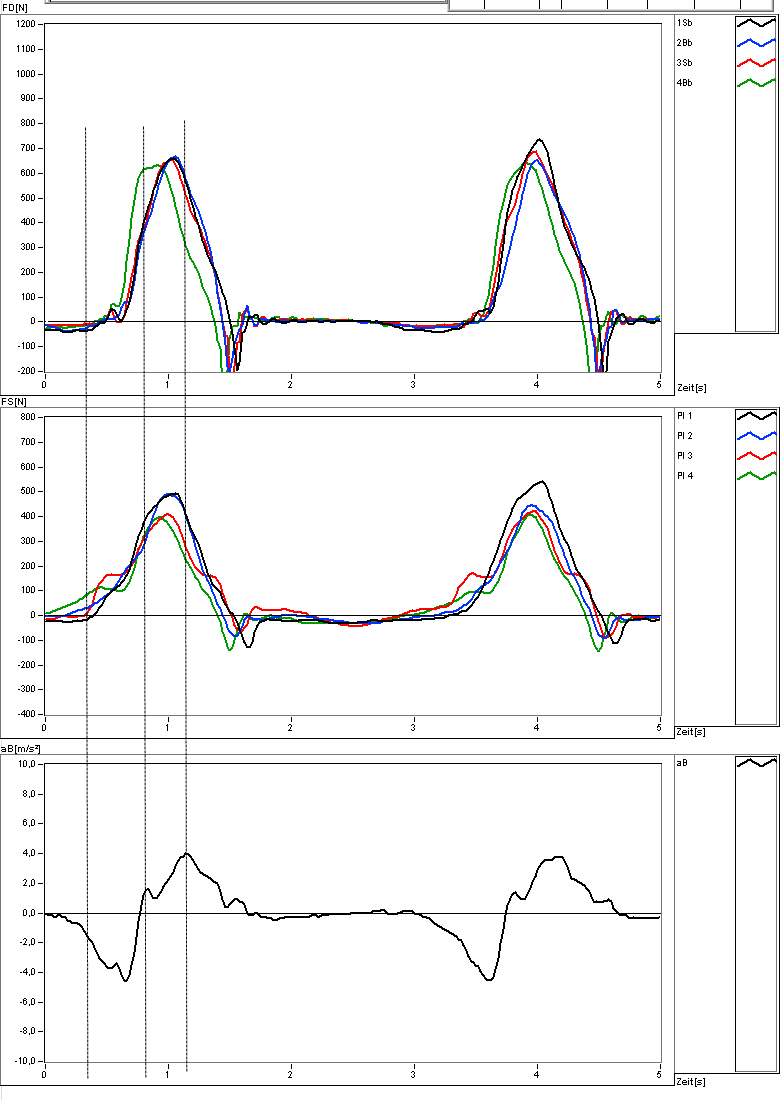 I have placed three perfectly vertical lines in the graphs to make it easier to align the measurements for comparison. Let us disregard the obvious synchronicity issues in the crew for a second and look at the first 0.5s. We can see that stretcher force start to rise while gate force remains at zero, resulting in a deceleration of the boat. At about 0.7s, before the second vertical line, the boat has experiences zero acceleration, even though stretcher and handle force are close to 50% of their respective maximum. At this point, the crew performs a lot of biological work to create the force, yet nothing happens. Because the direction of stretcher and gate force are opposite, they cancel each other out.

Next, we see a positive acceleration of the boat with the gate force exceeding stretcher force. However, at about 0.8s, shortly after the second vertical line the boat acceleration = net boat force show a “dip”. Where does this dip come from? 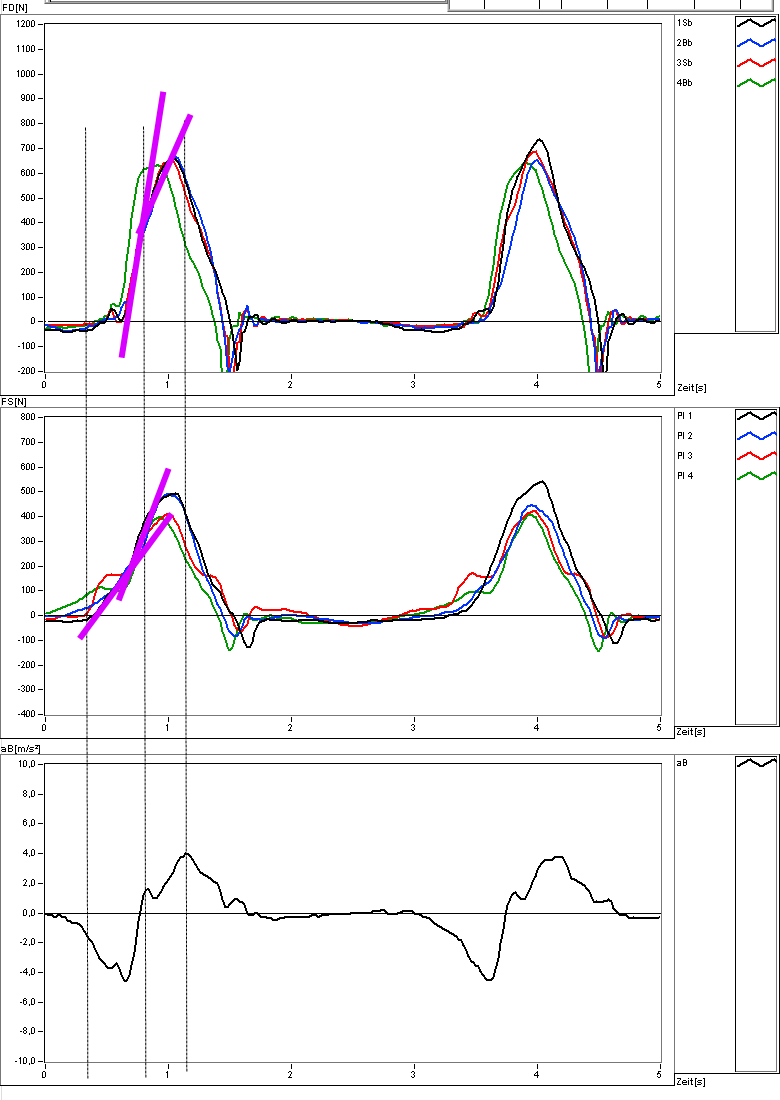 I have marked the critical parts in the force curves with a thick purple line. Because they cover all graphs, they are a good approximation for the “crew total” force. Looking at the gate force, we see that it’s slope decreases at this critical point while the slope of the stretcher force increases. As a result, the sum of stretcher and gate force decreases for a short while. This is what creates the drive hump. Why this appears to be a biomechanic necessity is an interesting question for another article. What this crew did right however was to maintain a significant positive boat acceleration even when boat acceleration temporarily dipped.

With Rowing in Motion you can easily measure boat acceleration and thus observe net boat force. The simplest option to get started is to use our mobile App running on a smartphone attached to the boat, which will use the builtin accelerometers to capture boat acceleration and display it in a live graph along with speed, stroke rate and many other interesting this. 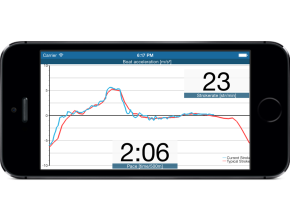