We have carefully evaluated a range of different metrics and have selected the ones we found the most useful and expressive in daily training. All metrics share the common goal of capturing a property of the acceleration graph in a simple to interpret number. We hope this helps coaches compare different stroke characteristics on a more objective basis.

All metrics are calculated based on the average of the last 5 stroke to make them more stable. This also means they are updated only every 5 strokes. The red line you see is the averaged acceleration graph, whereas the green line is the relative speed over time. What does relative mean in this context? It’s not an absolute speed, but a speed measured relative to a reference speed. The reference point in our case is the catch at the very left of the stroke graph. The relative change in speed is highly imporant in rowing. The result of applying acceleration to our boat is a change in speed. Effective rowing technique aims to achieve a high average speed over the course of a stroke. Tthat’s why the structure of the speed curve is highly important.

Stroke efficiency tries to estimate how efficent a crews distribution of power is over the stroke. The basic idea is that the boat has a higher average speed if the crew maintains a high boat speed for a longer part of the stroke. You can refer to the improve your stroke post for a bit more background on this. Stroke efficiency is calculated as the area under the speed graph, marked in blue below.

We need to be careful interpreting that number as a distance however, since we’re not measuring absolute speed but relative speed. So stroke efficiency is the distance covered each stroke due to the deviation of boat speed from the speed at the catch. For an intuitive explanation, please see “Stroke Efficiency Explained“. Good rowers achieve a stroke efficiency between 2.5 and 3.5 in the single sculls. What affects stroke efficiency? The two most important factors are the catch and recovery phase. Remember that the boat is slowest while catching, so it’s important to bring the boat back up to speed as fast as possible. After the drive phase, we enter the recovery phase with maximum velocity. Because the recovery phase is quite long, it’s important to maintain this velocity for as long as possible. In the above example, we see deceleration (red) very early in the recovery phase, corresponding with a decline in boat velocity (green).

Catch duration measures the time your boat is decelerating at the catch. 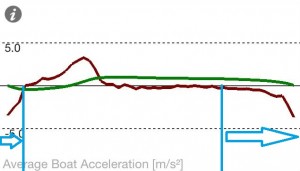 Catch duration is measured in seconds and lower numbers are usually better. Crews with a good recovery phase achieve catch durations in the range of 0.35s. Remember though, that the catch is not only about how long you deccelerated your boat, but also about the intensity. How well a crew manages this trade-off can be seen in stroke efficiency. 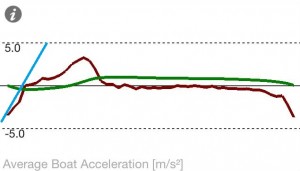 A higher catch efficiency is advantageous because it indicates at a quick increase of boat speed at the catch.

The check factor is simply the difference between maximum and minimum boat velocity. 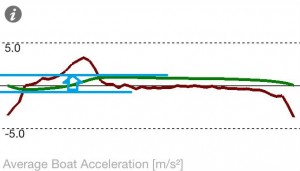 A lower check factor indicates a smoother movement of the boat, which is advantageous because it minimizes the loss of energy of the rower-boat system due to friction. The problem with friction or more precisely drag is that it increases non-linear with boat speed (in fact, the power to required to overcome drag is proportional to the cube-root of velocity!). This means that at the same average boat speed over the stroke, differently shaped speed graphs can result in a very different total energy expenditure.