This article is partly inspired by an interesting discussion on the decentrowing blog.

In the comments, someone brought up a link to a video by Drew Ginn where he advocates accelerating the sliding seat into the catch. This advice seems to be a bit unconvential  considering most coaches advocate a constant sliding seat speed into the catch . Now, Drew Ginn is a very successful athlete and it’s definitely worth listening to his advice. In this post, I’ll explain why Drew is right and how you can use Rowing in Motion to confirm that. I hope this serves as an inspiration how our Rowing Apps can help athletes improve their stroke and row faster.

Speed and the stroke cycle

Rowing boats do not move at constant speed. As the athletes apply force to the boat, velocity changes and that change in velocity is called acceleration. So by looking at acceleration over time , we can make a fair guess what happens to the overall boat speed. A crew will typically achieve the highest boat speed right at the finnish of the stroke as the boat’s been accelerating throughout the drive phase.

What does that imply for the recovery phase? We’ll look at two different rowing techniques and reason about their effect on boat speed.

Pulling on the stretcher

This is the style Drew Ginn advocates and I call “pulling on the stretcher”. After extracting the blades, you try to maintain a steady “pull” on the stretcher. This may even go as far as accelerating the driving seat throughout the recovery phase and “pulling” the boat underneath you. When you pull on the stretcher, you apply a force directed in the boat’s movement direction – the boat will accelerate. Another way to think of this is as a momentum exchange with the boat. Momentum is the product of mass and speed and momentum exchange describes what happens if two coupled bodys (the crew and the boat) change speed. I’ll lie to you a bit and proclaim that the sum of the momentum of the boat and the crew is about zero at any point in time if we discard motion relative to the water. Think you’re rowing in the air or on an ergo with slides. Why zero? Momentum is actually a vector so two momentums can add up to zero if they have the same length but opposite direction. For the sake of the argument, we’ll call the boats momentum positive and the athletes momentum negative.

As the crew accelerates towards the stern it builds up negative momentum, the boat has to accelerate in the opposite direction to build positive momentum. By pulling on the strecher, you will maintain or even increase the boat’s speed towards the catch.If you maintain a higher boat speed, this will also increase your average speed over the stroke cycle. Looking at the picture below, we see a good acceleration throughout the drive phase and then a flat line (= no acceleration) during the recovery phase. This indicates a high boat speed is maintained throughout the recovery phase. 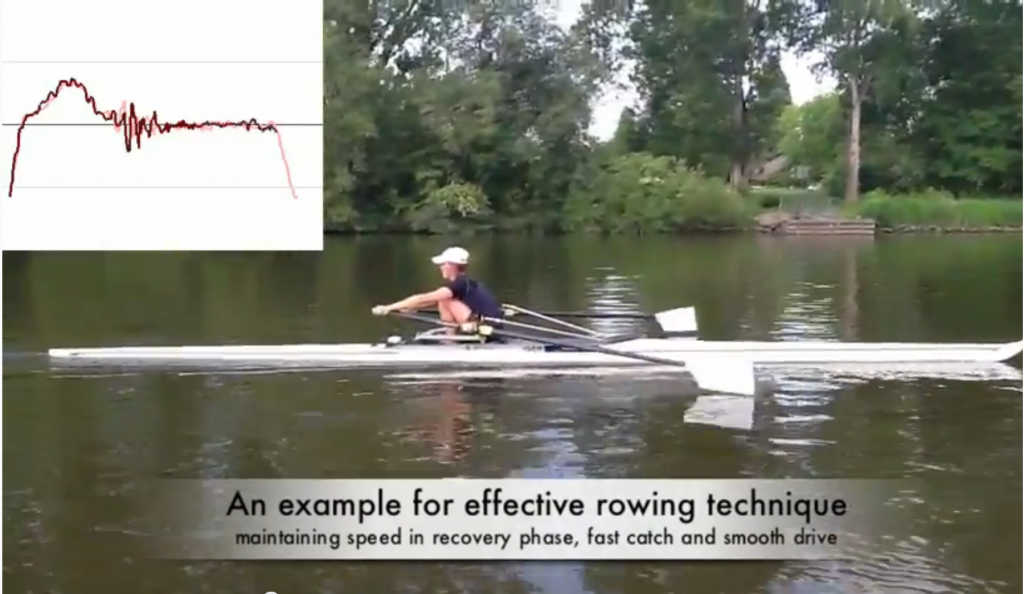 Pushing on the stretcher

“Pushing on the stretcher” is what I call the second style of handling the recovery phase. This is the style I see many athletes apply, even though they aren’t aware of it and for the worse: it’s slow. We’ll start by looking at the finnish and ignore the difference in the acceleration structure of the drive phase (which is a topic of another post). As we can see in this acceleration graph, the rower starts pushing on the stretcher long before the actual catch. Picking up the analogy of momentum exchange again, this means the rower excerts force on the stretcher towards the stern. The athlete slows down his body’s movement towards the stern so the boat has to slow down too to keep the sum of the momentum zero. What effect does this have on boat speed? Because we slow down the boat earlier, we have a decreased average boat velocity. 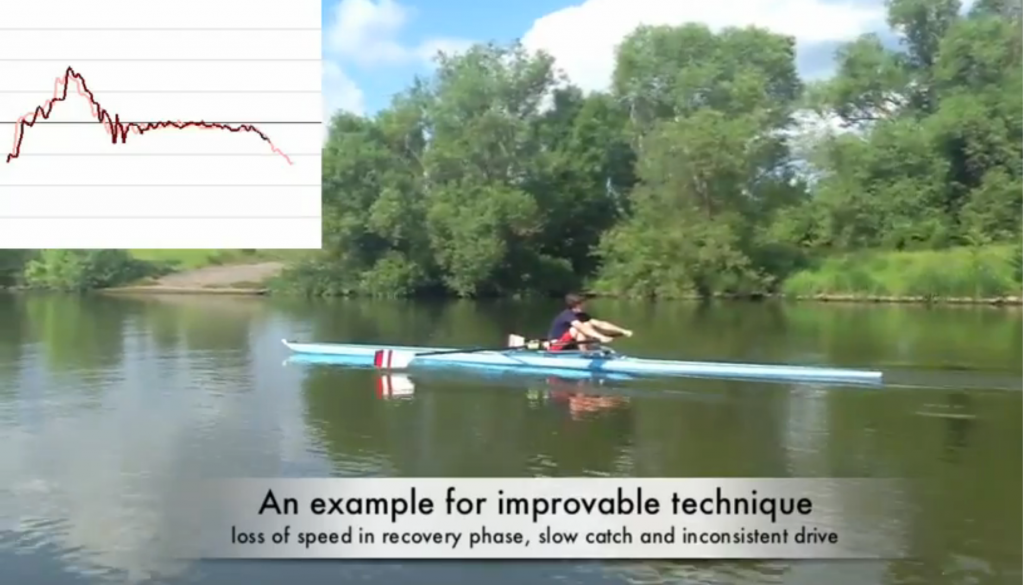 I have drawn up a quick graph in excel to help you better understand this comparison. It shows the relation between speed and acceleration of both styles of rowing. As you can see, until x=4 all graphs are the same. The “pull” style then continues to maintains a higher boat speed as the “push” style causes negative acceleration and the boat to slow down. The “pull” style comes at the expense of a steeper deceleration at the catch so the start and end speed of both strokes will be similar. What matters though is the average speed over the stroke, which I’ll define as the distance per stroke divided by the stroke duration in seconds. As the distance travelled is the integral under the speed graphs (the area under the speed graphs) and the stroke durations are equal, we conclude that the “pull” style achieves a higher average boat speed. It will bring you to the finish line faster! 🙂 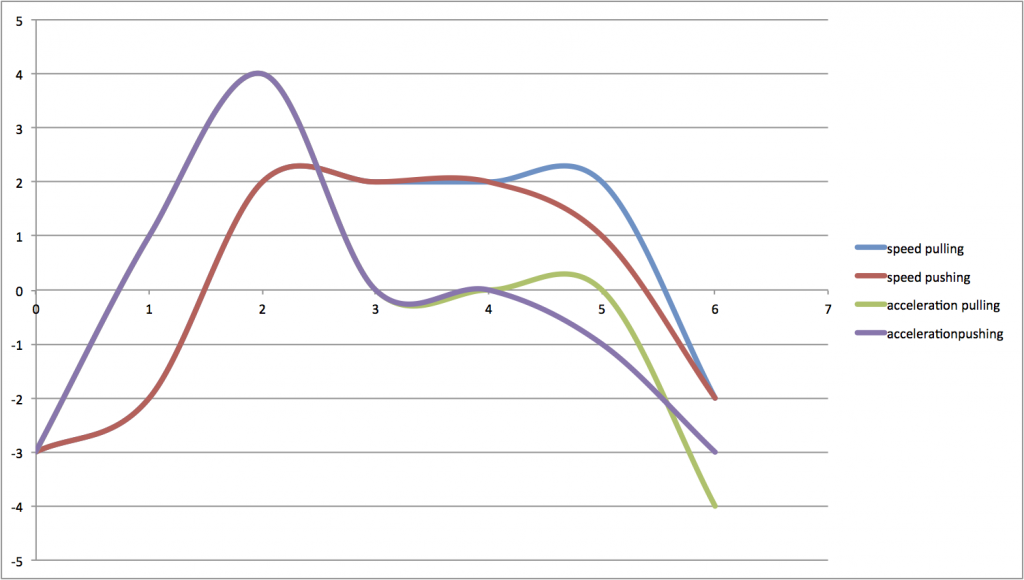 So how can I improve my recovery phase?

A word of caution: how “pull” can turn into “push”

You should start trying to apply the “pull” style today. Rowing in Motion can help you measure and verify your progress as you adapt your rowing technique by giving you feedback as you’re in the boat. Helping rowers improve the recovery phase is actually a great use case for sonification as it will allow you to hear when the boat starts slowing down too early. You can use the Coach App to capture a Rowing in Motion video that shows your boat’s acceleration and the crews motion synced
together so you can correlate changes in the motion sequence to changes in acceleration and speed. If you want to see some examples of this in action (including the examples above) you should check out Rowing in Motion on YouTube.

Want to learn more? See what Rowing in Motion can do for you to help you optimize your stroke.

What’s the style of your recovery? What do you teach your athletes? Let me know in the comments.