Thoughts on Fairness in Rowing

How large was the winning margin? Half a bow-ball. That is approximately two centimeters. That is easily the difference between rowing just a tiny bit more efficient or not. Dealing with rowing performance measurements all day, we know how important it is to consider the accuracy and precision of the measurement equipment when interpreting data. How does this apply to the olympic racing? Our exploration starts with a simple question: who should win this race? 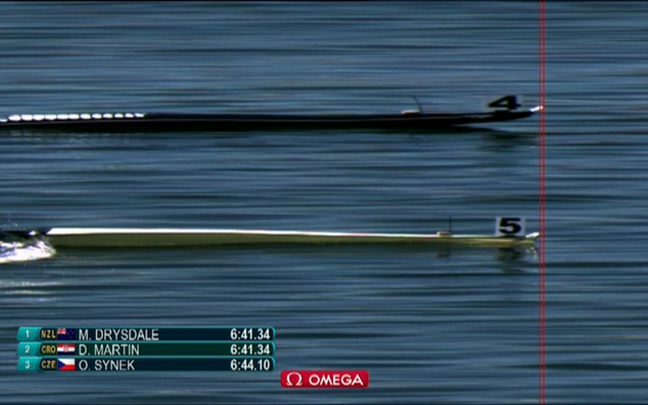 The rules of rowing are pretty clear. A race is won by the crew that crosses the finish line first. Nonetheless, this close result sparked a discussion why the race was not declared a tie and both participants were awarded a gold medal. After all, as spectators we frequently see ties in other disciplines like swimming, a point I will come back too at the end of this article.

As much as the decision of the jury was debated, it was absolutely correct. Let’s have a look at the relevant regulations in the FISA 2015 Rulebook, APPENDIX 4 – Bye-Laws to Rules 42 to 44.

Times shall be shown to 1/100th of a second on the Results Sheets and on the Scoreboard.

In the case of close finishes the order of finish must be determined by means of special equipment such as a photo-finish camera, capable of measuring and displaying differences to at least 1/100th of a second.

The official results reported both participants at a time of 6:41:34, which is a consequence of this rule. It’s not a limitation of the actual equipment used for the timing. The timing equipment used shows a clear difference in the photofinish and quite likely supports a much higher resolution of times than 100 frames per second (which equals 1/100th of a second). Would a “lesser” photofinish camera have awarded a tie? Let’s do some back of the envelope calculation. The boats moved approximately at 5m/s, or 5cm in 1/100th of a second. The winning margin was 2cm. So the answer is… probably. My take on the matter? It’s not fair to judge a race down to a precision the equipment can’t deliver.

I think it’s very unfortunate that the Rulebook does not state the exact precision of the photofinish equipment to be used. Whether a tie is awarded or not could (theoretically) depend on the photofinish resolution. For practical purposes though, this likely does not matter as long as the resolution of modern photofinish cameras is typically on the order of 1/1000 – 1/20000 of a second and very few races need to be decided on the level. However, and this is an important point, “infinite” precision would always be able to decide any race. But even then you need to stop at some reasonable level because the physics gets murky at the quantum level. To illustrate this point, let’s look at this photofinish of the BLW2x semifinal at the U23 World Championships in Rotterdam last weekend: 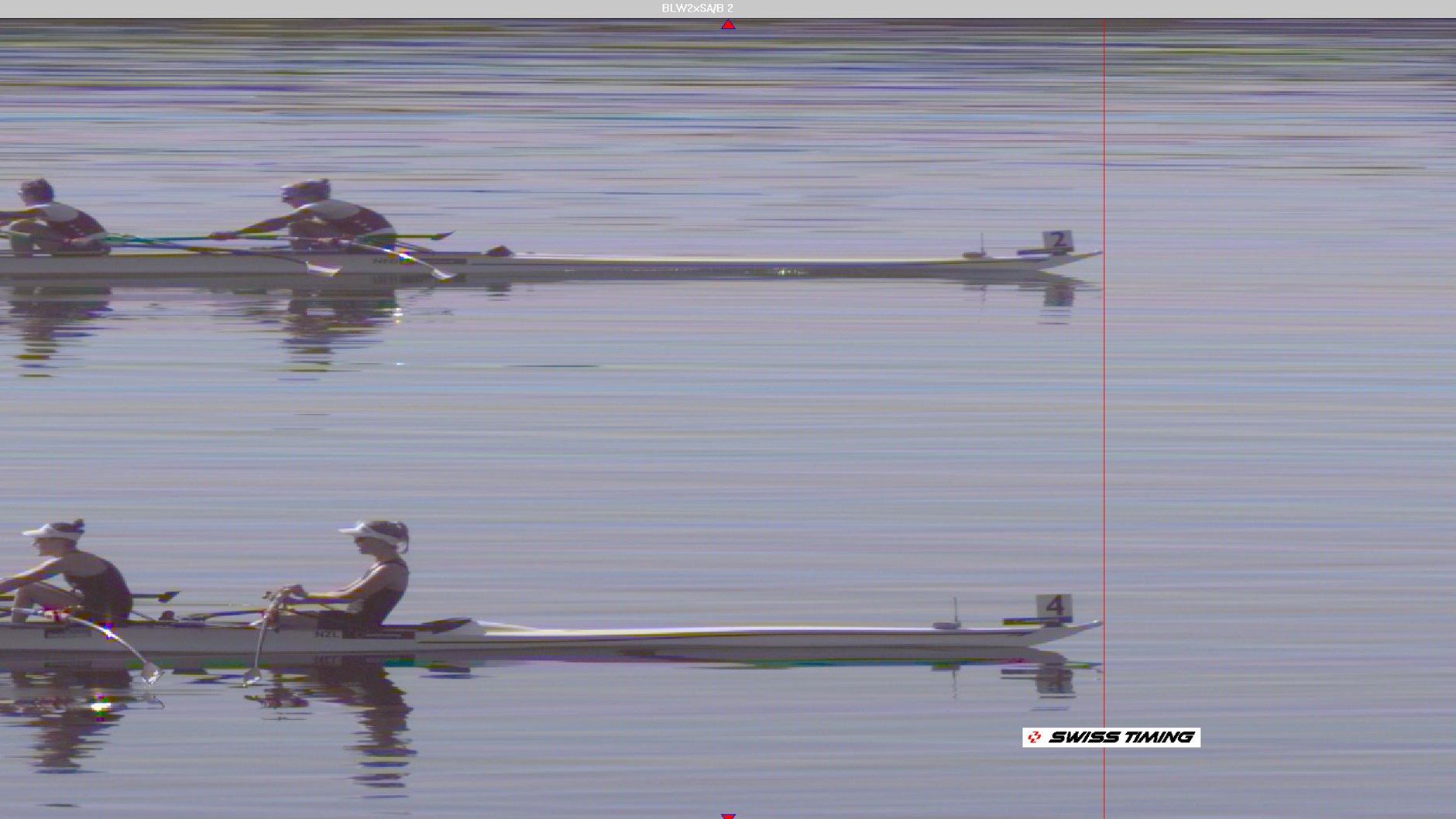 Looks like a tie, doesn’t it? Here’s what the rule book says:

When the order of finish between two or more crews is too close for any difference to be determined, then the result shall be declared a dead heat between the crews involved.

But imagine you could zoom into the image some more because a nanometer-resolution finish camera was used. It’s possible you could see a difference if you can see a couple of nanometers. Would it be arbitrary to say 1/1000 of a second is the resolution to be used (~0.5cm in most rowing disciplines)? Yes. But allowing use of anything better than 1/100 of a second  is very arbitrary as well.

What could FISA do? Specify the precision, make it slightly less arbitrary than it currently is.

A standard international course shall be straight and shall not have less than 6 racing lanes. It shall provide fair and equal racing conditions for six crews.

The rule book even prescribes a minimum water-depth (which is very important as it has an effect on the drag of the shell in the water). However, the rule book does not mention how the length of the course is to be determined. Modern survey equipment can easily measure down to millimeters of accuracy, but can the course be built to those specifications? What is the allowable tolerance? And more importantly, what is the allowable tolerance between lanes? Unfortunately the rule book does not specify those.

In any case, from a fairness point of view the most important aspect of the course is that the start line is perfectly parallel to the finish line. The standard procedure is to visually align the boats from the aligners hut:

This shall be a fixed structure placed exactly on the start line, ideally not less than 15 m from the first lane and no more than 30 m.

Again, the tolerance is not specified. How exact is, “exactly”? The aligner visually aligns the boats, which has its own problems if high precision is required. In an olympic regatta, the alignment is thus delegated to an Alignment Control Mechanism (ACM), sometimes also called “starting shoes”.

How accurate is the alignment using an ACM? The system must be approved by FISA, which is good, but does “approval” cover a survey of the installation of the system as well? What precision of alignment can the system maintain under changing thermal conditions (e.g. a metal frame may expand), when loaded with wind? How rigid is the ACMs construction? These points may all seem like nit-picking. However, I feel they are important when we consider judging races by margins of two centimeters. I think it’s not fair to judge a race down to a precision higher than that of the course.

What could FISA do? Specify the allowable tolerances for course length and alignment control mechanisms. Make them part of the “accreditation” criteria for a rowing course.

Well, but what about conditions then?

We accept “unfairness” in conditions between lanes all the times due to wind and waves, which may be different between lanes for various reasons like the famous “shelter island” around the 1000m mark in Brandenburg, this year’s host of the European Championships. Depending on wind conditions, “shelter island” gives an advantage to the lanes closer to the island or to the shore. If the effect of outside conditions is so important, why bother with course length and photo finishes?

I can very well understand this argument. The Rule book mentions the “nature of the sport” in a number of places. I think this fundamental “unfairness” caused by environmental conditions is part of the nature of rowing. Just like a possibly wrong decision made by a referee is part of the nature of soccer. But it’s easy to argue it would be unfair if one goal was slightly larger than the other one, even if it’s just a few millimeters. The same applies to rowing.  The vagaries of outside conditions are part of the sport, being imprecise is not.

How can we deal with this “unfairness”? If you can’t control it, make it part of the game. That’s what we do in rowing too. The lane assignment is based on the results of the heats and repechages. Each crew thus has equal chances to race for a “good” lane.

There was some debate about the “fairness” of the default lane assignment after the 2014 World Championships, when the German M8+ lost to Great Britain by a margin of 0.66s. By default, lanes are assigned “inside out” with the fastest crews from the heats receiving the center lanes and the slowest crews receiving the outer lanes. In Amsterdam at the time of the race, wind conditions were toughening up. The Germans had won their heat over GB, who had to go through the repechage. That’s why the Germans received lane 3 (center) while the British team received lane 5. Being closer to the shore, lane 5 was a bit better protected from the ensuing cross-winds.

Some commentators of the race argued, the jury should have changed the lane assignment in those conditions in favor of the German team. One rule that enables such an action by the jury and the starter is the Bye-Law 1.3 to Rule 96:

The Starter shall consider whether the wind is likely to create unequal or unsafe conditions and, if directed as described below, or after consulting with the President of the Jury, shall take whatever steps may be necessary in accordance with these rules to ensure a fair and safe race. The President of the Jury shall inform the Starter of any required changes at least two minutes before a start.

From the point of view of the athletes involved in this race, the decision of the jury must seem arbitrary. What could FISA do? Why not make the lane assignment decided by the crews themselves or their coaches? This would immediately end all debates of blaming and criticizing the jury’s decisions around lane assignment. Let the starter have the crews draw their lanes by the order of their heat results, we already have a system in place for ranking those. I realize this may be hard to implement logistically, but I think it’s worth thinking about this.

Swimming (at least the indoor variant) does not have to deal with the vagaries of outside conditions. However, most distances raced are much shorter than in rowing. Unfortunately, most pools are built from concrete. Despite its apparent simplicity, casting concrete to exacting specifications is a very difficult undertaking. The international swimming association FINA thus states that the allowable tolerance for pool length is 3cm. That’s about the distance a swimmer travels in 1/1000th of a second (source). Consequently, ties are awarded if the finish falls within this margin of error.

Should rowing adopt a similar ruling? I think it would enhance the fairness of the sport. Let’s discuss in the comments!