Designing a Measurement System for Rowing: The different levels of measurements in Rowing

After the previous discussion of desirable properties of measurements in rowing, we will now look at measurements that are commonly performed in rowing and how well these measurements satisfy the above-mentioned properties. For this purpose, we will group them by their level of feasibility and insight that they offer into the rowing stroke.

Other posts in this series:

Visual analysis is the most basis form of everyday measurement and coaching in rowing. Following a set of guidelines for how the supposed “optimal” motion sequence of the athletes should look like, coaches look for deviations from that role-model and work together with the athletes to achieve a correct performance of the motion sequence. While biomechanic modelling indicates that certain patterns in motion sequence prove to be more effective than others (see [1] for a comparison of different rowing styles), the “optimal” motion sequence is a highly debated topic and it is not uncommon to see very successful athletes deviating significantly from the postulated role-model. Leaving aside these issues, effectively using visual analysis in coaching proves challenging in the face of the problems it has to achieve the properties of a good measurement.

One of the problematic aspects of visual analysis is that it lacks precision and detail. Visual analysis is most often of qualitative nature, not based on quantitative data. Even when effort is made to quantify certain parameters (e.g. angle between upper body and legs), the procedure to derive such data is unprecise and cumbersome. Also, comparing data based on visual analysis is very difficult even when recorded on video, since the observer usually does not have a fixed position relative to the boat and so the angle of observation or distance to the boat keeps constantly changing.

Visual analysis lacks detail, because it does not allow direct insight into why a boat it is moving. In fact, visual analysis is not measuring any physical parameter that is directly related to moving the boat forward, it is merely observing outside effects. Any changes to the athletes motion sequence to conform with a role model are speculative at best and without further measurements can’t be proven to improve boat speed. On the upside, visual analysis is very easy to conduct and thanks to the widespread availability of quality video-cameras in smartphones and tablets very cheap.

Even though visual analysis is problematic when used alone, coaches should keep in mind that it is the most important tool to convey to their athletes how they should effect a desired change in a different measurement parameter. Athletes need to perform a certain motion sequence, and changing that is their primary tool for solving the rowing optimisation problem. In order to make any other kind of measurement understandable, connecting it to visual analysis is tremendously useful.

Speed is the raw form of the rowing optimisation problem: travelling a fixed distance in the shortest time possible. However, speed is also the perhaps most misunderstood measurement in rowing. To help clear out this misunderstanding, we first need to define what “speed” means in the context of rowing. While this may sound like an academic sand table exercise, it is highly relevant. There are three different “kinds” of speed that we need to discern based on what they mean. Speed over a distance, Speed over a time and instantaneous speed. When we are talking about the rowing optimisation problem, we are looking at speed over a distance. The distance is fixed, so what is measured is time to travel this distance and then the average speed is calculated based on that. So ultimately, this is the metric that rowers need to improve. On a side note, it is important to point that speed and velocity are not the same thing. Velocity is a vector, e.g. it also has a direction, whereas speed is only a scalar. Therefore, velocity is basically “speed with a direction”. When we refer to the rowing optimisation, it is in fact speed that we are interested in – speed along a straight line from start to finish. As anyone who has ever tried to precisely steer a boat through an albano buoy system knows, that’s unfortunately not how it works in the real world, so the values of speed and velocity can diverge.

Speed over a time is not very relevant in rowing and is calculated  by measuring the distance travelled in a fixed time interval. What however is very relevant in rowing is instantaneous speed and its relation to speed over a distance, i.e. the rowing optimisation problem. Rowing boats do not move at constant velocity, as can be evidently observed by boats constantly pushing forth the bow tips during a race. 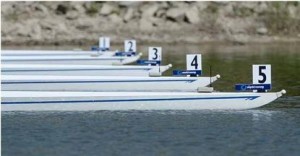 Instantaneous speed is often used to make a projection for speed over a distance. A useful form of such a projection is the speed over a single stroke-cycle, i.e. the distance per stroke divided by the duration of the stroke. This allows coaches and athletes to see any changes in “average” speed that the boat makes on a stroke-by-stroke basis. This type of calculation is also what most rowers are used to based on the visual representation of speed on rowing ergometers.

In terms of measurement accuracy the longer the speed and time being measured the more accurate and precise the measurement will be. Even though the measurement errors when using a stopwatch and manual “finish line”  detection are quite large, their effect tends to be low compared to the long distances and times travelled in rowing. When looking at speed on a stroke-by-stroke basis however, such measurements cannot be accurately and precisely made by hand, which makes measuring this kind of speed more difficult because measurement hardware in some form is required.

Measuring speed on a stroke-by-stroke basis however is much more demanding in terms of measurement accuracy and precision because the distance traveled per stroke is in the lower 10m range and times in the few seconds range. This is why e.g. even high grade GPS is not suited for stroke-by-stroke measurement of speed, an aspect that many GPS based systems try to hide by using some form of a “smoothing” algorithm. Unfortunately, that means that typical devices used in rowing today can not deliver this type of highly desirable stroke-by-stroke feedback for athletes (was this stroke better than the last one?). Future devices that use a combination of a hull mounted impeller, GPS and inertial sensors should be able to alleviate this.

Aside from these technical issues, speed is also very prone to be affected by uncontrollable environmental conditions, most notably wind and water conditions [2], which makes it hard to compare two speed measurements that were not taken under the same conditions. Nonetheless, speed remains the most important measurement in rowing performance as it is the raw form of the rowing optimisation problem. Coaches and athletes need to keep this in mind when looking at “lower-level” measurements like acceleration and force measurements. Rowing is not a single-dimensional optimisation problem, improving one parameter without simultaneously ensuring boat speed improves (or could potentially improve when combined with other changes) will ultimately not lead to the desired outcome.

As we’ve seen in the discussion of boat velocity, rowing boats do not move at constant velocity. Information on the exact changes in boat velocity is highly valuable to derive insights into how boat speed can be improved. Assuming a crew that perfectly reproduced the same motion sequence and power application under constant conditions, we could observe that boat velocity periodically changes around a constant stroke-by-stroke velocity.

These changes in boat velocity are called acceleration that occur as a result of the forces acting on the boat(e.g. drag, gate force etc.). Because acceleration has such a direct relation to boat velocity and captures the result of all the complex interactions of forces acting on a boat, it is a highly important measurement. Thanks to the proliferation of smartphones with built in acceleration sensors, coaches and athletes can measure boat acceleration with sufficient accuracy and precision by simply attaching such a device to the rowing shell. 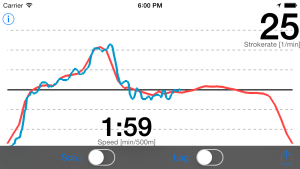 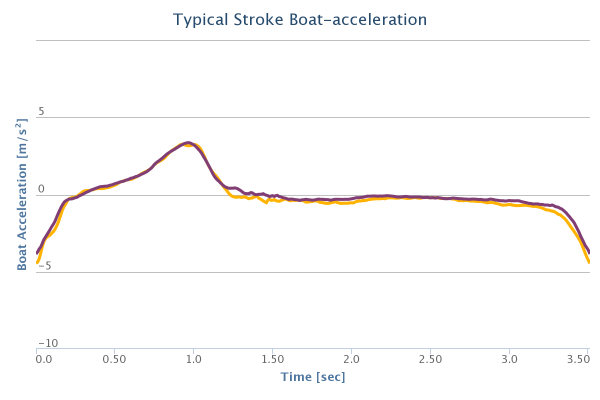 Boat acceleration is also very easy to understand for athletes, since it is proportional to the propulsive force acting on the boat. This means that any change in the propulsive force that the athlete generates is directly reflected in boat acceleration. This is very useful when combined with powerful feedback mechanisms such as sonification, that allow the athlete to perceive these measurements in realtime.

While acceleration is highly useful as a measurement in rowing, it is an aggregate metric for the whole crew and does not allow individual insight into the contributions of each athlete to the propulsive boat force. However, this type of information is highly relevant for crew selection and synchronisation.

To gain deep insight into the rowing stroke and support individual improvement in crew boats, measurements of parameters at each seat in the boat are required. Whereas acceleration was the change in boat velocity and reflected the end result of all forces acting on a boat, this type of measurement gives coaches and athletes into those forces that produce the observable acceleration.

A clear advantage of these individual measurements is that they are very comparable, although interactions between individual crew members in the same boat must be considered. This is why such parameters, especially when they allow conclusions on individual power application in a boat are often used in crew selection on national teams.

Unfortunately, these types of measurements have been historically difficult to conduct and require special sensors and procedures to produce accurate and precise measurements. With recent advancements in measurement technology and wireless communication, this is about to change and the next few years will likely see some exciting advancements in this sector.

Working with individual athlete data in a boat however is challenging. The mechanical interactions in the rowing boat are still not fully understood today (e.g. the influence of vertical seat force  [3]), although the scientific literature has proven a set of basic relations between forces acting in the rower-boat system. Through these complex interactions, relating such a measurement to an improved solution to the rowing optimisation problem is a process driven by experimentation and validation. This makes it even more important that such measurement technology becomes widely available and easy to use.

We hope this article provided some insight into the aspects of effectively using measurements in rowing. Rowing in Motion is dedicated to provide the rowing community with tools that make producing and analysing measurement data as easy as measuring stroke-rate is today. Why don’t you give using measurements a try to improve the effectiveness of your training?