Designing a Measurement System for Rowing: Force and Power on the Oar

In this series of posts I’d like to give you an overview of the Rowing in Motion Sensors, how they work and what considerations we made in designing them. As part of Rowing in Motion’s philosophy to make powerful biomechanic feedback and analysis accessible to coaches and athletes on every level, we hope to shed some light on the secrets of performance measurement in rowing that has previously been only practised by researchers and biomechanics.

In this first instalment, I’d like to present various methods for measuring blade-force or possible substitutes and discuss the individual benefits and problems of each method. While explaining these concepts requires some technical and physical terms, I will try to offer a layman’s explanation in most places. This may not be fully accurate in every case, so please bear with me. I’m always looking for ways to explain things better, so feel free to make suggestions in the comments and I shall try to incorporate them.

Power and Force in Rowing

Since the oars and blades are the only point of exchange of propulsive forces between the boat and the water, measuring the “output” by each individual rower on the oar or the gate provides valuable data and feedback for coaching.

This “output” has different parameters that are interesting to look at:

This data highly interesting both from a physiological perspective for controlling intensity and from a biomechanics perspective for working towards a more efficient stroke. Combined with a device to measure oar angle and timing this allows us to measure the force-angle curve and force-time curve, which provide insight into how the crew moves the boat.

While the relation between work and power should be easy to understand, the relation between force and power is not so intuitive for many of the rowers and coaches I have worked with over the past years. Power is the product of a force on an object and the object’s velocity, or the product of torque on a lever and the lever’s angular velocity. This is very different from force, which describes the interaction between two objects that can (but doesn’t have to) change the velocity of those objects. I think the main reason why the difference between force and power is not intuitive is that you can spend a lot of energy without doing any work (as far as physics is concerned). When you lift  a 10kg weight by one meter against gravity you’re doing a work of 100 Joule. When you now keep holding the weight at that position you’re no longer doing any work, but you’re still exerting a force to counter gravity. Yes, this is totally counter-intuitive because it doesn’t feel like you’re not doing any work. Holding the weight is surely going to fatigue you over time and you need to spend energy to keep your muscles contracted. Now imagine you lifted the 10kg weight up one meter and put it on a table. Besides the 100 Joule for lifting the weight, no work is being done when the object lies on the table. The table doesn’t need to spend energy go keep holding the weight. So in summary, the problem is that you’re not a table (I’m just kidding). I hope this example made it clear that spending energy and doing work is not the same thing.

Dr. Valery Kleshnev has illustrated the difference between power and force in rowing very well in a recent paper. 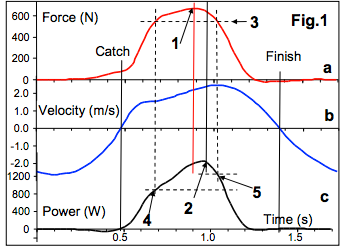 See the power and force curve? They are completely different, just compare the two different points 4 and 5 on the power curve that correspond to the same force values on the horizontal line 3.

The takeaway is that force  relates to acceleration (and thus speed of the boat), while power relates to the physical effort of the athlete. Confusing power with force or using the terms interchangeably is a very frequent mistake. My recommendation is that if you’re  focusing on training intensity in your coaching you should work with power measurements, if you’re focusing on boat speed you should work with force measurements.

Measuring Force and Power in Rowing

Measuring forces at the blade would be a logical first step because it is the point of exchange of propulsive energy  between water and the boat. Measuring blade force requires attaching a measurement device of some sort between the shaft and blade. This method is very problematic for a number of reasons. The measurement device needs to withstand very tough conditions (exit in and out of the water) and high accelerations due to the rapid changes in velocity associated with the long outboard levers we use in rowing. Because of this, any additional weight that the measurement device adds to a standard oar has a huge impact on blade momentum, which may in turn change the “feel” for the rower and “waste” energy. Modifying each blade makes it also a very intrusive and cumbersome method. And if you wanted to try different sets of oars, you’d need to instrument each of them as well – which is likely a permanent decision for the lifetime of that particular oar. Due to its method, it only measures force, but not work or power directly. 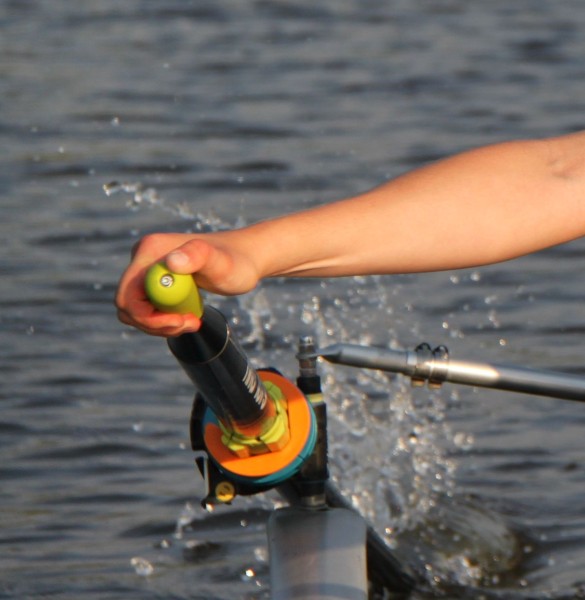 An oar handle under load.

Because measuring blade force is so difficult, researchers in biomechanics have developed alternative methods. When the individual power input of each rower is of interest, measuring handle force is a similarly effective method. One can argue that it is better suited for this purpose because it doesn’t take into account shaft flexibility and thus measure the true “input” of an athlete. However, it also shares similar drawbacks like measuring blade force, mainly that some measurement device needs to be integrated between the shaft and the handle, which may make the system less portable between oars of different manufacturers or handle constructions. Computing power from handle force requires knowledge of the involved levers (inboard and outboard) for calculating handle velocity. However, the point of force application (by the rower) is not consistent and may vary throughout the stroke by +/- 5% (link to Biorow study), so calculating power from forces remains associated with an error in that range. 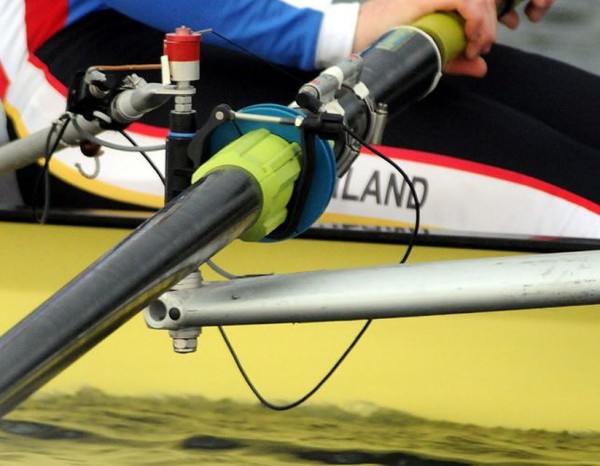 The next type of sensors used to measure individual rower force and are so called “oar bending” sensors attached to the shaft. Because this method measures torque on the shaft this method can be used to accurately calculate power when the angular velocity (derived from an oar angle measurement) is measured as well. Reversed to the situation above, calculating the handle force from such a measurement remains associated with an error, as the exact point of power application through the hands varies and is not exactly known. An advantage of this method is that the sensor itself is very simple and can be manufactured at low cost. For practical purposes, this method has some drawbacks though. First, it requires exact calibration to the specific bending properties of each shaft. For serious measurements, such a calibration needs to be repeated for every oar before every measurements and should involve measuring more than 2 different loads on the oar. Oars likely change their bending properties over time due to wear (just think about how many thousands of bending cycles an oar has to go through in a single week of elite training!) and also in relation to temperature. Calibrating the oars in the cool boat house and then rowing in the hot sun is likely to affect their temperature and bending characteristics considerably.

Finally, we can measure forces on or inside the gate. This has several advantages: changing a gate is a quick operation and if designed to work with a standard gate has no intrusive effect on the rower (changing the “feel”). This improved usability comes at the cost of more expensive manufacturing. The sensor can be made very robust when fully integrated with a gate so that it is suitable for long term use, compared to an oar bending sensor affixed to the shaft which can be easily damaged when carrying the oars around.

Care needs to be taken with regards to the direction of force being measured. Ideally, a sensor is insensitive to any vertical force application that comes from the weight of the oar on the lower rest of the gate during blade entry and extraction. The sensor also needs to cleanly separate forces perpendicular to the shaft (i.e. the propulsive component) to those parallel to the shaft (i.e. the force use to hold the oars in the gate by pushing outward, which doesn’t help propulsion). Failure to do so may result in inaccurate measurements that may easily lead to false conclusions. This is especially important in sweep rowing, where “leaning on the rigger” by the athlete may create a significant force parallel to the shaft which a wrongly designed sensor could measure as propulsive force, which it clearly isn’t.

The problem of isolating the propulsive gate force from the vertical and parallel forces is very relevant for all designs that measure force on the pin, where the sensor doesn’t rotate along with the gate.

The Rowing in Motion Gate Sensor

Looking at this summary, it became clear to us at Rowing in Motion that designing a gate sensor that provides the most compelling solution. Our sensor is carefully engineered in cooperation with the experts at EvoSense and provides a clean measurement of propulsive force. 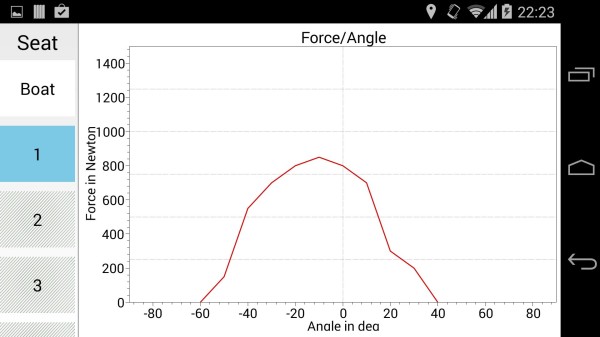 Each gate sensor features an integrated microprocessor for processing the measurement data and a low power wireless transmitter for transferring the measurement data to the boat sensor box, from where it is relayed using WiFi to as many tablets or smartphones as you want (in the boat and for the coach). We took great care to minimize the calibration effort to make the system as easy to use as possible. An easy calibration procedure will be required only once after installation and takes less than 30 seconds to complete per gate.

Inside the App coaches and athletes can select the seats that they want data to be displayed for on the left hand side and scroll through various screens such as force-angle and force-time diagrams on the right. We plan to make these screens customizable and have some exciting features lined up that will integrate live feedback with previous analysis. We do currently complete evaluation of the prototypes in internal testing and will unveil the full system at the World Championships in Amsterdam from 24th to 31st of August. The first units of the system will be hand-built here in Germany and are scheduled to ship to selected customers around October. If you’re interested to be one of the first to get access to the Rowing in Motion Sensor System, please leave me a mail at johannes@rowinginmotion.com along with a references to your rowing programme.