For todays’ blogpost I want to thank Gregory Smith for allowing us to share his rowing data and discuss some of the results and recommendations I gave him to improve his rowing technique. Greg has a very interesting training blog  on the indoorsportservice.co.uk forum (community members only) that should give fellow master rowers some good inspiration for training.

In addition to recording the rowing session with Rowing in Motion, Greg did also record his rowing on video using a stern-mounted GoPro. He did later then manually sync up the video to the TCX export from Rowing in Motion using Dashware, so that you can see the strokerate and distance too. I think this is really cool if you don’t have a coach to record an automatically synchronised Rowing in Motion Video with embedded Boat Acceleration of yours!

Alright, with that said let’s jump into the analysis, starting at strokerate 20. This is the reply I sent to Greg when he asked me about my take on his rowing session: 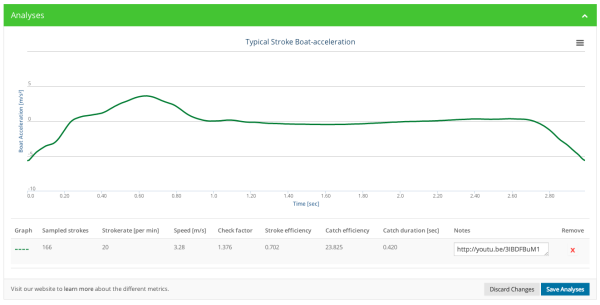 Looking at the acceleration graph, the first thing I note is the inconsistent rise in boat acceleration after the catch (it works in two consecutive “phases” with increasing slopes). I’d be inclined to attribute this to your “deep” catches that make it more difficult for the blade to “catch on”. You’re already working on that I see, the markers on the shaft are useful but you can’t look out the boat all the time. Would be interesting to see if a different style at the catch can make the acceleration graph rise smoothly at the catch. Sonification may be able to help you here to give you a more instant feedback than the graph.

In order to work on that, I suggest you need to start with a different style of preparing at the catch. Currently you’re squaring the blades fast and late accompanied by a clear dip with the hands that raises the blades away from the water. Because you want to hit the catch right, you compensate by lifting the hands fast at the catch and thus “ditching” them into the water. Try squaring early, as soon as your hands are over your feet and more slowly. While you square, try easing the pressure on the handle so that the blades slowly move towards the water. Think of a constant “upward” motion of your hands like they were attached to an inclined rail. Let the blades “fall” into the water by themselves. Ideally, you’d have them hit the surface exactly at the maximum angle position. I can’t tell from the current camera position, but it may also be the case that you’re a little short at the catch (need to see it from the side to know for sure, or have angle measurements with our wireless sensor gate (still prototype 😉 ).

Other than that, your drive looks good to me, recovery as well. Though there’s potential for maintaing boat speed a little longer at the catch (you have a clear “pulling on the stretcher” phase from 2.2 to 2.8s in to the SF20 stroke, you could probably pull a little lighter and get into 2.9s and decrease your catch duration down to 0.3s (which is what I have seen some top athletes do) 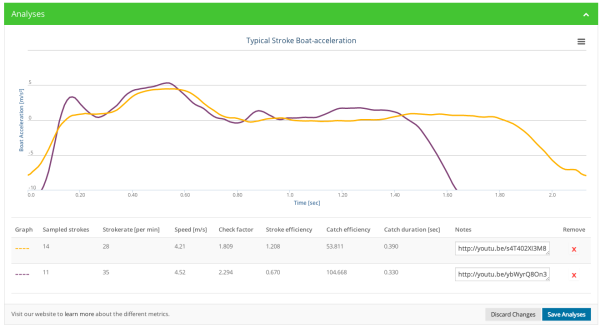 SF 28 (video) and SF 35 (video) show a drive hump. Apart from the deep catch creating too much load, it seems to me that you raise your upper body too early. That’s a common cause for such a hump. Video from the side would be more helpful to see this though. Other than that, a pretty good drive and consistent recovery. I’d not go further analysing SF 28 and SF 35 in detail at this point, you should focus on getting your catch right at SF 20 and then see whether this translates to higher stroke frequencies (it happens that it doesn’t, but there’s no point trying it at SF 35 before you master it at SF 20).

I’d say the most important thing to work on is indeed the catch, which you can probably improve using an appropriate “preparation” of the catch. Overall, I’d say your rhythm is pretty good and shows a “feel” for the boat!

That’s my ideas for now. As for drills, my experience from coaching is that it’s a very individual thing and there’s no “one size fits all” solution. Some drills just seem to snap with some athletes, so you need to find the one that works for you. Remember, the goal is to “teach” your feeling for how a good stroke must feel like and then keep working on reproducing that good feel.

Want to get your own Analysis?

Our Rowing in Motion App for iOS and Android displays and records boat acceleration, speed and strokerate and supports direct data upload to Analytics, our cloud based data analysis platform. Included with every subscription to Analytics is free consultation on questions of data interpretation and we’re more than happy to do everything we can to help our customers make progress with achieving a better rowing technique and share our insights from working with several elite athletes. Go ahead and start a trial and send your first recorded rowing session my way, and I’ll give you a few tips and tricks.