“Crews have a signature rowing stroke”

If you’ve been rowing for a couple of years, I’m sure you’ve heard this quote in one way or another. Let’s look at this from the athlete’s perspective to make this intuitive. Maybe your coach told you to look at a crew that is doing particularly well and try to learn from them. But is it actually possible? Can you copy the “signature” rowing stroke of another crew, leaving behind or altering your own “signature stroke”?

Those are very good questions. But before we go into them, let me give you a practical example that demonstrates the “signature stroke” actually exists. I’ve seen this phenomenon with athletes on every level of the sports that I’ve been working with, be it elite athletes running for the olympics, juniors or masters. For the sake of an example lets use my own data, because I’m free to share that. Please don’t use it as an example for good rowing technique ?. 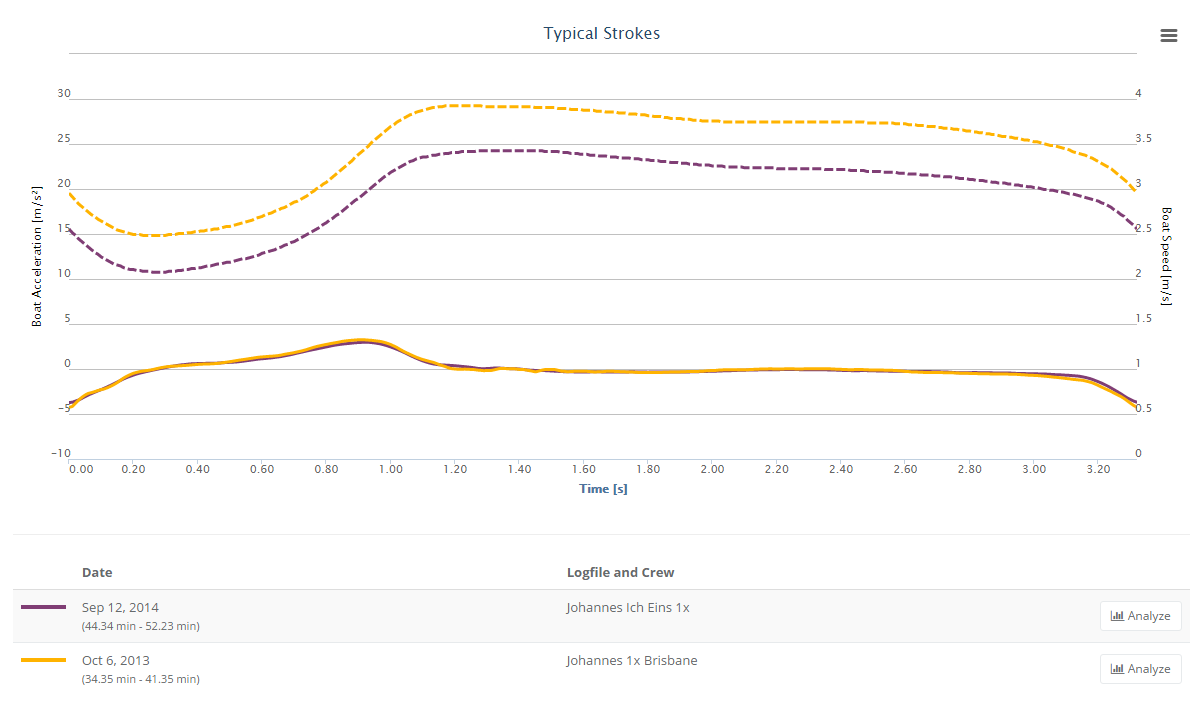 This compares my rowing stroke in the single between 2013 and 2014. Rowing in Motion sampled both of these “typical strokes” sampled from more than 70 recorded strokes each, so the result is highly reliable. The sessions were recorded 11 months apart, in two different boats, on two different rivers and yet they look almost identical. This is why it’s called a signature stroke and it demonstrates why boat acceleration analysis is so useful. It’s a very stable measure of a crew’s rowing technique, to a high degree independent from conditions and gear.

Given all these differences between the two recordings, why are the two typical strokes so similar?

Why Crews have a Signature Stroke

Rowing is a complex motion pattern requiring precisely timed interaction of multiple muscle groups, mainly the legs, trunks and arms. As with every kind of motion sequence, it is learned through repetition until it becomes semi-automated. Whereas a novice rower would need to constantly focus on all aspects of the rowing motion sequence, more experienced athletes have developed semi-automated movement patterns. They can consistently repeat these patterns over and over again without requiring mental focus. This leaves room to focus on other important factors of rowing performance such as synchronization with the crew or steering. And most importantly it leaves room for putting extra focus on a single aspect of the motion sequence that you want to improve. I’m sure you can relate to this experience by thinking about how you learned to row yourself.

This semi-automation is what creates your “signature stroke”: it is the consistent repetition of a learned motion sequence. Automation through repetition is a core requirement for racing. As you move towards the finish line, the overwhelming physical fatigue makes it increasingly difficult to focus on proper rowing technique. You may be able to focus on good rowing technique for the first 500m, but it will be very tough to give it the same focus during your final sprint as you try to give your boat the maximum propulsion your physically capable of.

When you’re at the point where controlled focus on your technique starts to get difficult or is no longer possible, the efficiency of your signature stroke determines your performance on the water.

What makes a Signature Stroke Fast?

Let’s change to the coaches’ perspective. Some crews manage to be faster than others with a similar physiological capability. The difference is in the rowing technique. I’ve covered efficient rowing technique depth in a range of articles on this website.

With mental focus, it’s possible for an athlete to actively adapt his/her rowing technique. However, permanently changing a learned motion sequence is very difficult and any coach can testify it’s all too easy for athletes to fall back into old habits. But I’m certain achieving permanent change would be outright impossible if you didn’t have objective feedback on your technique in the first place. If you change something about your rowing technique, how do you verify it’s not only changing the feel for the boat, but it’s actually making it run faster? This is where a tool like Rowing in Motion comes in and can help you provide instant objective feedback on the effectiveness of your rowing technique with boat acceleration analysis.

Athletes have different models of rowing technique in mind when they think about their optimal rowing stroke. This is what determines their signature stroke:

“Every rower realizes rowing technique differently. One hears the boat, another watches the blades, and another feels the forces on the hands or feet”

This is a quote from Volker Lippens in “Rowing Faster”,  edited by Volker Nolte, Chapter 16. The research he presents in this chapter looks into how coaches can better work with athletes to achieve a biomechanically optimal rowing technique by changing the psychological model the athlete has in mind to affect this change. Put in a different way, athletes control their motion sequence based on a reception model of how a good rowing stroke should feel like to them. Any deviation from that model is usually perceived as uncomfortable or negative, so by default athletes will always gravitate towards their comfortable, learned habits.

The key to learning a more effective rowing technique is thus to first establish a feel for the new technique, consistent with the athletes mental model of the rowing stroke. Second the athlete needs to break his old habit and make the newly adapted rowing technique the default.

An athlete needs to be able to reconcile after each stroke whether he/she successfully used the adapted rowing technique or not. It’s thus a prerequisite that the athlete learns to perform the adapted motion sequence required by the new technique and that he experiences how it affects his/her perception of the rowing stroke. In other words, an athlete needs to train his “feel for the boat”. Rowing in Motion provides instant visual and acoustic feedback through sonification that can help athletes better correlate perception with actual biomechanical outcomes. This results in a faster learning of efficient rowing technique.

Because athletes gravitate towards their learned habits, it’s important they break them so that a new rowing technique becomes their “signature stroke”. One main factor is creating a motivation for change. An athlete needs to understand the need for a technique change. Instant feedback from a biomechanic measurement system like Rowing in Motion can help in two ways here. First it helps demonstrating that a new rowing technique results in increased boat speed. Second it provides instant feedback should the athlete fall back into old habits and thus serves as an objective “reminder” that the athlete can consult any time.

In my coaching but as well as my own rowing I’ve found that several methods can help an athlete to break old habits when applied temporarily:

It is also worth noting that a technique adaption usually requires a physical adaption from the athlete as well. Identify any strength-building that may support the technique adaption or exercises that can improve the relevant coordination (e.g. drop-jumps for improving the catch). Sometimes it’s even possible to change the rigging to assist with a technique change.

At this point you may wonder what my result is with consistently using Rowing in Motion for a year to improve my rowing technique.

I’ve managed to improve my catch and drive phase to create a better boat acceleration in this early phase. The boat is picking up speed earlier and the recovery phase is considerably longer. My approach into the catch has become a little worse though, so that’s what I’ll need to work on next. The instant feedback provided by the system has been invaluable in determining when I “got it right” and helped me focus on reproducing the feeling of those strokes. So to close this article: It’s possible to change your signature stroke, it’s hard work and it’s worth it.

But don’t take my word for it, here’s what some of our customers have told me about their progress:

“the realtime acceleration graphs (backed up by offline analysis) have helped me focus on the parts of my technique that matter.  My technique is now better and I race faster. ” – Stephen Trowell (AUS)

“I’m using Rowing in Motion since April 2013. I’m excited about the App and have become significantly faster since using it.” – Hari Meusburger (GER)

“I have only been using the app a couple of weeks and it has already been a big help. My stroke efficiency has gone from averaging 2.2 to averaging 2.8 and a boat a weight category higher than recommended by the manufacturer has shown to be consistently faster for me.” – Mark Lidell (UK)

Have your own story to share? I’d be very happy to hear from you!